This is a 45 hectare secluded oasis, hidden on the northern side of Buderim, less than a kilometre from the Buderim Village. This rainforest world boasts tall trees, ferns, babbling waterfalls, cascades and bird calls.

Earliest photographic evidence states the main waterfall was called “Lindsay Falls” after the Lindsay Family who owned much of the area.

The area was purchased many years ago by the Council as a reserve for all of Buderim. Amazingly much of the creek actually belongs to private land owners as once did the waterfall!  The falls were a favourite recreational place for the region’s indigenous people and have been unofficially named “Serenity Falls”, but are widely known as the Buderim Falls.

Dogs are not permitted in Buderim Forest Park by the Council . . . it’s a nature reserve and (as much as we love dogs)  it is not an appropriate place to walk your pooch. To answer the question “Can I hold a baby shower/wedding/rock n roll concert/etc. in the park areas?” The areas are public spaces under the governance and control of the Sunshine Coast Council. If you are wanting to hold a party or event that is allowable in public spaces, you may be sharing it with others not in your party. Our recommendation is that you check with the Council to see if your event is permitted.

This begins with a car park overlooking grassy huge park, there are electric barbecues and picnic tables available. At the end of the short loop road, you will find an elevated wooden boardwalk, which carries you through the forest, criss-crossing Martins Creek at several spots. The boardwalk is excellent for disabled walkers and wheelchairs, but you will not be able to take a wheelchair to the falls area as is it too steep. In addition, after the board walk there are challenges which may also impact on any walking disability.

Keep following this trail and the reward is a sensational wander through serene bushland along the creek, past babbling cascades and ultimately to the Buderim Falls.

The upper entry point at the base of Quorn Close has a good amount of parking and a memorial garden in memory of Edna Wallings. Edna is famous for creating many gardens around the world and actually retired here to Buderim in Lindsay Road. Also at the top you will find picnic tables and barbeque facilities.

Walk past the picnic area and the dirt path takes you through a reasonably steep bush walking trail, which is OK for people with moderate fitness, but is not suitable for wheelchairs, people with any walking difficulties and strollers etc. The paths take you straight to the Buderim Falls and the high arch bridge spanning the creek above the actual falls. This is a very popular and beautiful spot. 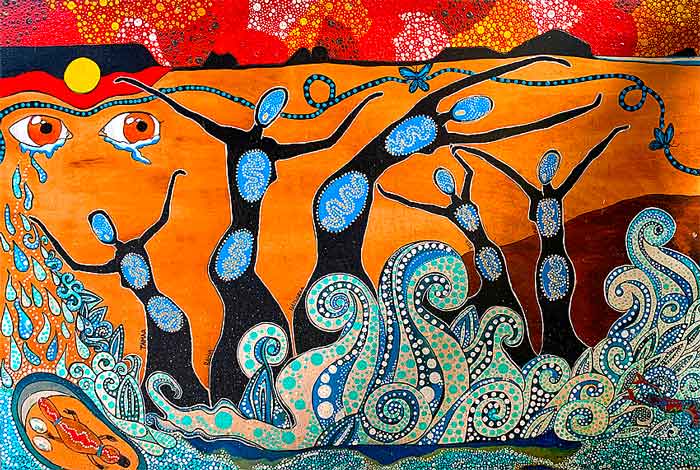 This stunning artwork by Wiradjuri Artist Kim Spittles is at the back of Wunya Park near St Marks Church. It portrays the creation story of the “River of Tears” of which these falls are a part.

It is interesting to note that Martins Creek has never stopped running, the headwaters apparently springing from a source on land now covered in an urban development between Tulip Lane and Burnett Street.

Buderim, like most of Queensland’s mountains, has its share of waterfalls. Beautiful is the legend which lingers about the waters that plunge from ridge to ridge like live things.

Indeed, that, according to aboriginal lore, is just, what they were — three beautiful maidens, sisters, whose warrior lovers were slain whilst out hunting.

After search the maidens found their dead bodies. Disconsolate, they wept continuously until impatient gods, weary of their sorrow, changed them into the three falls of the valley; but as we know, even the gods cannot stay love, and the three dead warriors immediately changed themselves into rainbows.

To this day, should you care to look, you may still see the iridescent flash of the rainbows’ colours gleaming through the falls’ waters.

[The 3 waterfalls on Buderim are: Buderim Falls (originally known as Lindsay Falls), the School Falls; and a waterfall near Price Lane. There are other falls in Foote Sanctuary, Buderim Forest Nature Refuge, Buderim Forest Park and near Mons.]

FUNKY FACT: The bridge was lowered into place by a hovering helicopter after being built offsite!

Should you swim there?

The creek is spring-fed at the source, but passes through many urban developments and stormwater drains to reach the falls and we have observed beer bottles from low-life visitors floating in the water. So who knows what is on the bottom?
We would not advise swimming in the water. 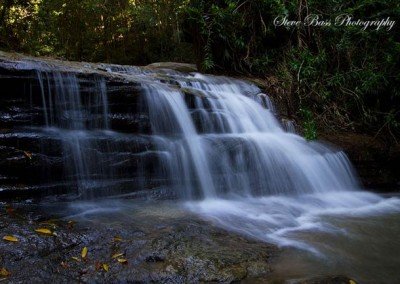 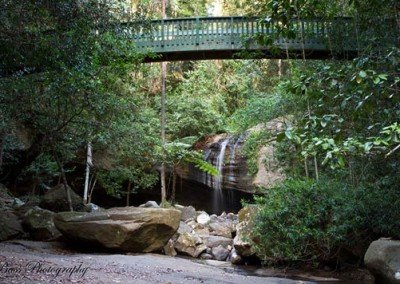 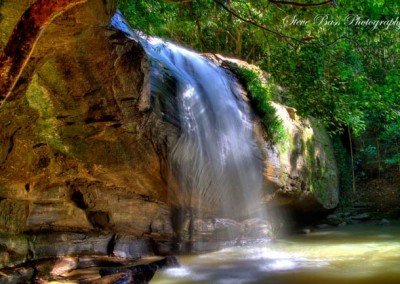 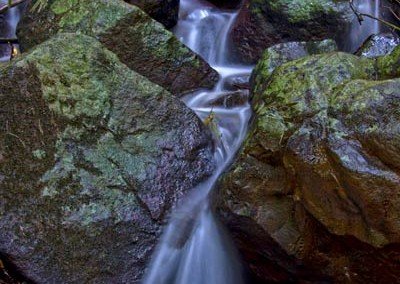 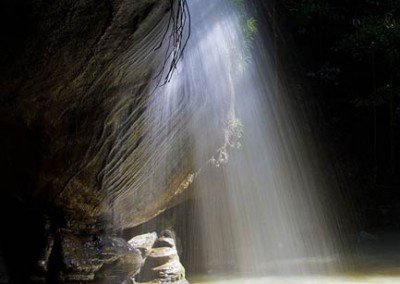 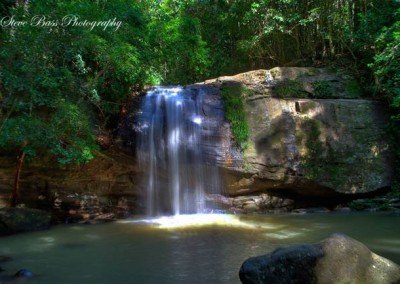 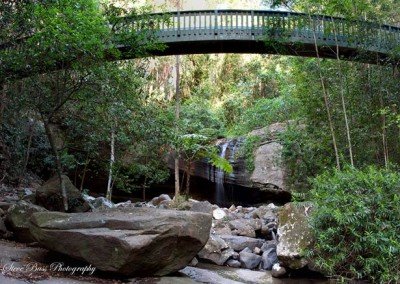 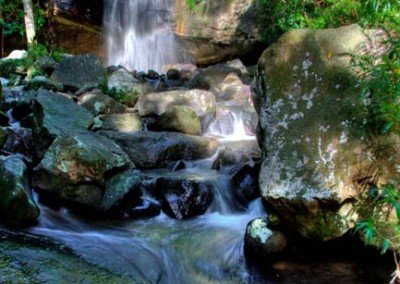 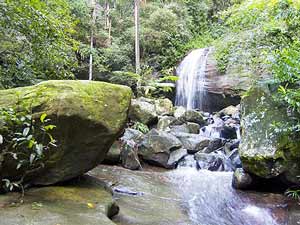 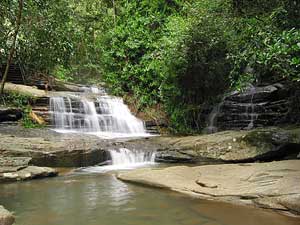 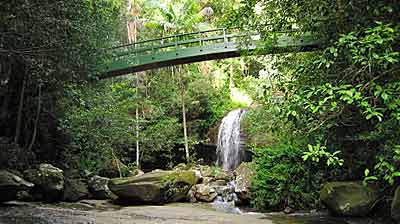 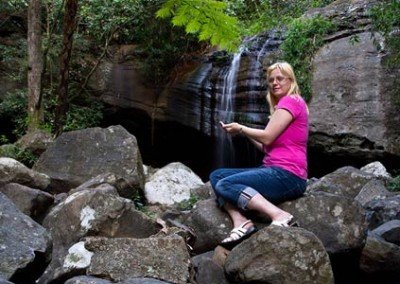